deancasbigbang I Called You Sweetheart.

Title: I Called You Sweetheart
Rating: Adult
Pairing: Jensen/Misha, implied Misha/Sebastian Roche, slight Jensen/Jared (mostly friendship)
Word count: 23000
Summary: Jensen and Misha were high school sweethearts, now they’re college sweethearts and they’re well on their way to being sweethearts through finishing grad school, to joining the workforce, to becoming little old men, screaming at kids to get off their lawn. A few weeks ago, though, Jensen messed up. Big time. He let flattery and curiosity and base desire get the better of him and he crossed a line. He cheated.
Now he has to deal with the repercussions of what he’s done, and the possibility that Misha might not be as able to forgive him as he’d hoped.

So, I have two coloured drawings, one from the start of the fic, one from the middle and there was supposed to be one from the end of the fic as well, but time ran out and I just have that one sketched out. I want to finish it though so if you're interested, pop back in a while and hopefully, I will have updated this post.
( Collapse )

sabriel_mini "I Always Have Time For You"

Summary: Studying, exams, and the payoff at the end of it all.

So, since January, I have been working on a fic I like to call "Disturb The Sound Of Silence". I finally posted it (or you know, started to do so) and this is the masterpost. As the chapters post, they will appear here. The fic is planned to be twelve chapters in total and a sequel, shush what are you talking about? Either way, this is my baby and I hope you will enjoy! 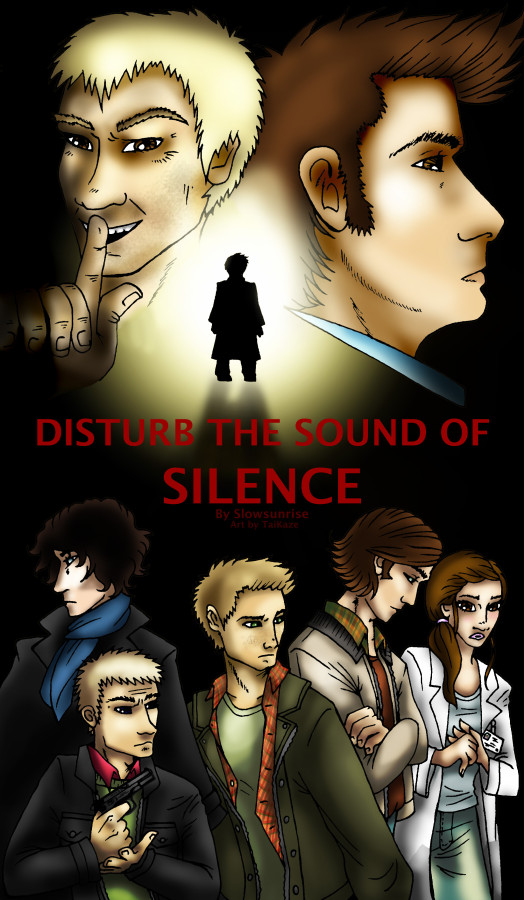 The absolutely brilliant poster is made by Taikaze @ Tumblr, so go give her lots and lots of love because hell knows she's worth it. Just look at that beauty!

Disturb The Sound Of Silence

- A Supernatural/Sherlock Inception fusion fanfic crossed over with Doctor Who -

get_themilkjawn (like seriously, pretty much at least half of this is her idea, and that includes the idea)
Fandom: Supernatural/Sherlock Inception fusion crossed over with Doctor Who

To set everything straight: Supernatural and Sherlock are totally AU, an Inception fusion. The fusion is in turn crossed over with Doctor Who. Thus, Dean is an extractor, Sherlock is a forger and the Doctor is a Timelord. No Inception characters makes an appearance.


Summary: During a dream extraction three years ago, Dean lost Cas mysteriously. Now, someone who calls himself a Timelord claims that he can bring him back, if Dean and Sam performs an inception on another Timelord called the Doctor. To help him with the almost impossible task, Dean hires Sherlock, John and Molly to his team. Together with the Timelord, they embark on a journey taking them deeper and deeper into the Doctor's mind. Soon they realize that it's not a place one wants to be 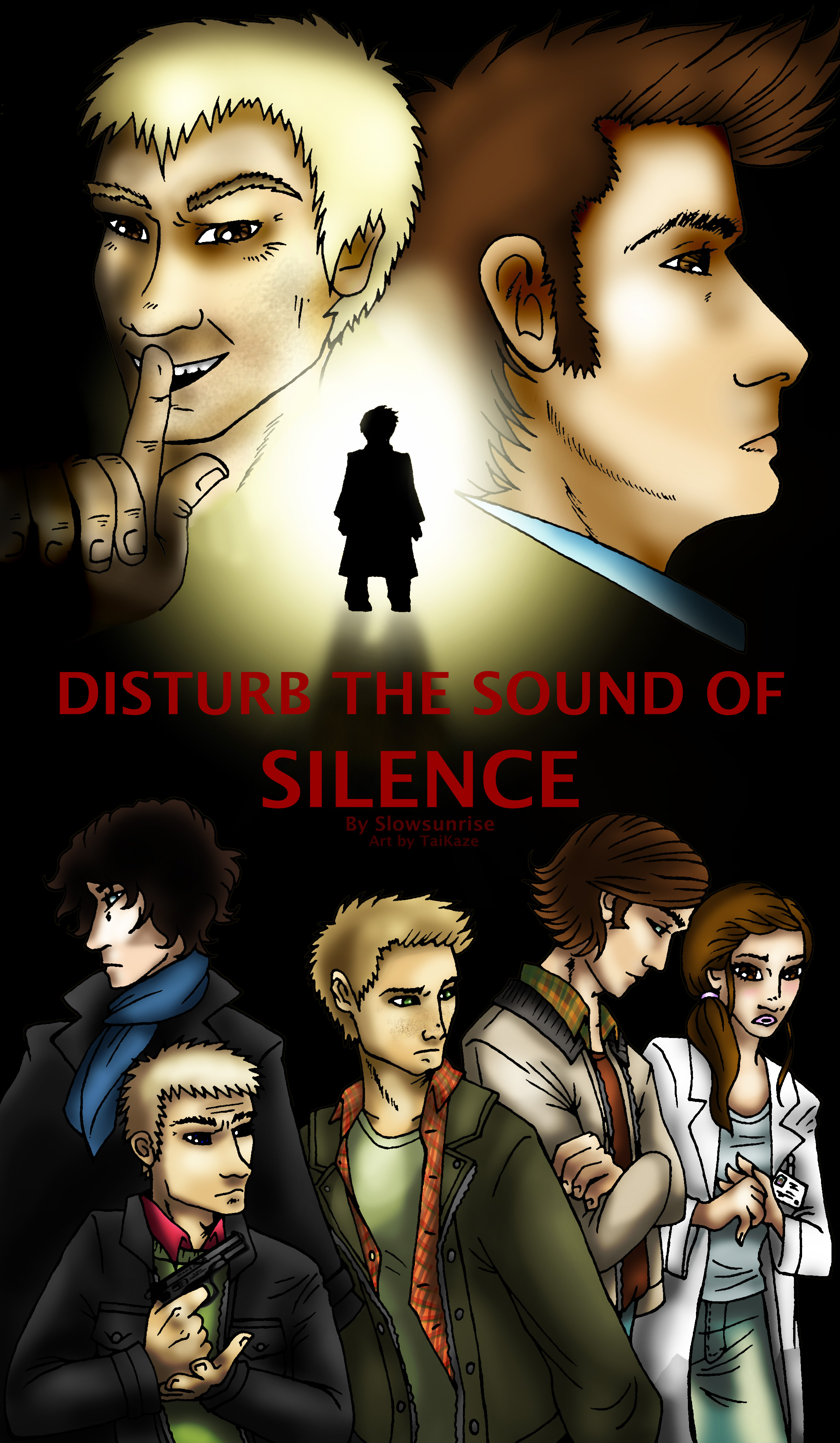 Click Here For Masterpost with summary, author's note and all chapters

Disturb the Sound of Silence

During a dream extraction three years ago, Dean lost Cas mysteriously. Now, someone who calls himself a Time Lord claims that he can bring him back, if Dean and Sam perform an inception on another Time Lord called the Doctor. To help him with the almost impossible task, Dean hires Sherlock, John, and Molly to his team. Together with the Time Lord, they embark on a journey taking them deeper and deeper into the Doctor's mind. Soon they realize that it's not a place one wants to be.

au_bigbang Angels in the Architecture.

Summary: John Watson is human. Humans are fragile. Breakable. Impossibly strong, too, in ways that anything that's not human can barely understand.

John is human, and so he is loyal. He has faith. But he has doubts, too, and courage. Anger and sorrow. Hatred, and love enough to spare.

John Watson is human. Sherlock Holmes is not.

This is the art I created for

johnlockbigbang "For you I bleed myself dry".


Summary: Sherlock was born for the sole purpose of keeping Mycroft alive - Mycroft, who was suffering from leukemia. Sherlock was always kept under close supervision as a child. He was homeschooled and wasn't allowed out past the Holmes estate boundaries. As soon as little Sherlock is old enough, he begins donating tissue for various transplants that Mycroft needs. Mycroft is eventually cured and has been well for quite some time now, but Sherlock, as he continues to grow up, becomes increasingly resentful of his family and of Mycroft, whom he blames for everything that has happened to him. Sherlock eventually is able to flee the Holmes household, escaping as soon as his parents no longer have power over him by law, and he attends university and later meets Lestrade and begins his detective work. But he is still always, always alone. He is alone for so long and then suddenly he's not - he meets John and everything changes. John teaches him what it is to care and be cared for, to love and be loved. And Sherlock is, for the first time in his life, happy, really, really, stupidly happy.

Sherlock doesn't intend on telling John about the details of his childhood until Mycroft falls ill again and everything comes out as Sherlock's parents contact him directly for the first time in many, many years, begging him to save their son.

It's a AU with Adam and Michael as musicians and it's utterly adorable! You should all read it. I hope the art somehow reflects on how much I like the fic, because really, it was so sweet. I read it the first time snuggled up in a blanket and it was simply the best for fuzzy feels of joy. Enjoy theart and enjoy the fic! :3

Summary: One year after Adam Milligan announced that he was leaving the band that he formed with his brothers, Adam is back in the music world as a solo artist. He shares a tour bus with his opening act, Michael Milton, who also inspired his solo album. During their three months traveling across the US, they bicker about pop music, meet each other's families, and record it all with weekly tour videos.

So, finally had a full day of work (in preparation for the hell that is going to be tomorrow) and I spent it, well, for starters, I spent the whole day in overalls and that was hot. Worth it though, because otherwise I'd have gotten paint on my clothes while doing this:

So yes. I am now riding a TARDIS. We had an appropriate maiden journey and crashed because my dog caught sight of a cat. Cats don't belong in the time vortex.

So, this is really the art for the first fic I claimed at

johnlockbigbang, but unfortunatly, my author had to drop out, so I'm just posting the art here now since I was already finished with that when I got the news that she had to drop.

Either way, what I did read of the fic was very good and it inspired me to do this picture. The fic was revolving around soul bonding, and during the moment of this image, Sherlock has been shot and is dying. In an act of desperation to save his friend's soul, John bonds with him. At least, this is what that looked like in my mind. Somewhat. At least I had fun with water colours again.

I hope you enjoy the art even if there isn't any fic to go along with it. And I am sorry, but background? What are you talking about? Pff.
( Collapse )
Collapse